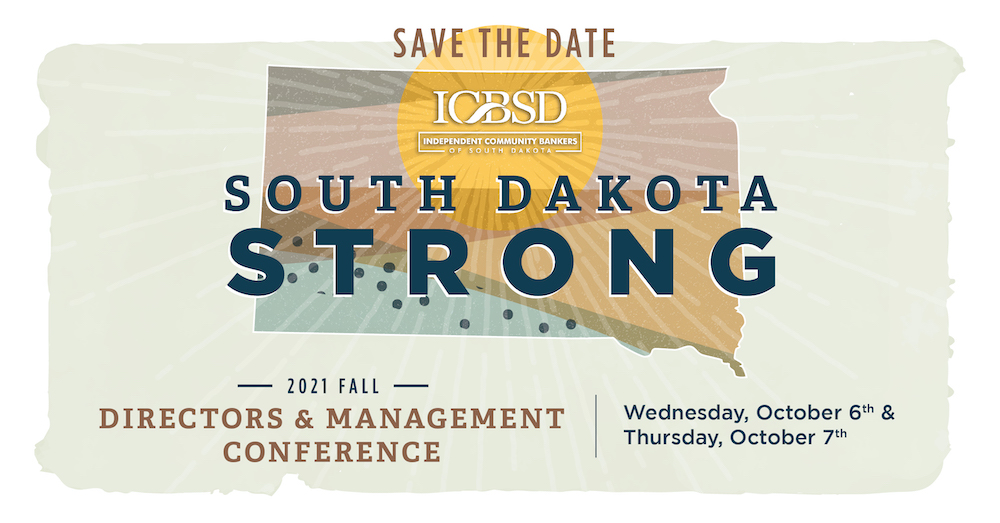 Meet the men and women who will be sharing their time and expertise with us during the 2021 Fall Directors & Management Conference taking place October 6th -7th in Sioux Falls! We are grateful to have them as part of our event!

To learn more about the event and to register, click here.

Bret Afdahl, Director of the South Dakota Division of Banking

Bret Afdahl was appointed Director of the South Dakota Division of Banking in May of 2011 after serving as Counsel to the Division since October of 2006. Bret is a Past Chair of the Conference of State Bank Supervisors (CSBS), the nation’s leading advocate for the state banking system, and currently serves on the FDIC Advisory Committee of State Regulators as one of its inaugural members. Bret is a graduate of Northern State University with a degree in political science and business and a graduate of the University of South Dakota School of Law.

Mike was raised on a farm near Lesterville, SD and graduated from Scotland (SD) high school. He attended college at South Dakota State University, graduating in 2003 with a BS in Mass Communications. After working for a large national bank, he started as an examiner with the Division of Banking in 2006. He served as Training Director from 2010 until September 2018, when he was named Deputy Director – Banking. He is a 2015 graduate of the Graduate School of Banking at Colorado and completed the Governor’s Leadership Development Program in 2019. Mike currently resides in Lennox with his wife Lindsay and three children.

“The Housing Landscape” with Lorraine Polak

Lorraine has been with SDHDA since 1998 and had a bachelor’s degree in finance and accounting from Chadron State College, Chadron, NE.

Todd Wilkinson is a co-owner and operator of a commercial cow-calf operation with his son, Nick Wilkinson in De Smet, S.D. He is also a co-owner of Redstone Feeders, a family owned cattle feeding and finishing operation. In addition, Wilkinson has practiced law for more than 35 years, specializing in estate planning and agricultural law. He is a graduate of Augustana College and USD School of Law. His firm, Wilkinson & Schumacher, is sought after by landowners (cow-calf, stocker and feeder segments) across the state when they are facing legal challenges.

Over the years, Wilkinson has been heavily involved in local, state and national leadership roles. During his time on the South Dakota Cattlemen’s Association Board he had many roles including president in 2015-2016. Wilkinson has also served on numerous NCBA committees as well as the Environmental Working Group, Traceability Working Group and Cattle Marketing Working Group. Wilkinson served as NCBA Region VII Policy Vice President for two years.

Wilkinson is a founding member and current Vice President of the South Dakota Cattlemen’s Foundation.

He is married to Jean and they have three children and seven grandchildren.

Glenn Muller has been the Executive Director of the South Dakota Pork Producers since August, 2010.  Glenn and his wife Joan live on their family farm near Davis, SD.  Glenn, a graduate of SDSU in 1973, has always been active in the Ag Industry as an Ag Teacher, Adult Farm & Ranch Management, Ag Loan Officer, and at John Morrell in Hog Procurement.  Glenn has been past president of the South Dakota Pork Producers.

Glenn enjoys raising show cattle and selling club calves.  Muller cattle has enjoyed much success in the Hereford Breed.  He also has enjoyed judging cattle and hog shows in the State and also at Little I – Brookings.  Glenn was Little I emcee in 2012.  Muller was a 4-H leader for 23 years in Turner County.  He also was on the Turner County Fair Board for 18 years serving as livestock chairman and was instrumental in starting the open class beef show.  Glenn has also been the FFA Livestock superintendent at the SD State Fair.

Glenn has volunteered at the Sioux Empire Farm show helping with livestock judging contests.  He has assisted with FFA and open class beef shows as ring man and helped out where needed.  In 2009 he was emcee of the Breeding heifer show.

Glenn and Joan have four children who were very active in 4-H and are still active in the Ag industry.  Sarah and Shannon Voegele live near Lennox.  Sara works at Poet Biorefinery, Chancellor in the lab.  Shannon is a cattle rep for Breeders World and sells club calves – Voegele Show Cattle.  Scott lives near Davis and has a large farming operation and a trucking business.  Shelly and Cory Altena live near George, IA.  Shelly is a cosmetologist at Your Unique Salon.  Cory farms and manages a hog confinement.  They raise and sell club calves – Altena Show Cattle.  Steven and Amy Muller live near Agar, SD, they raise cattle on the Sutton Ranch and operate Midwest Sonotech – a cattle ultrasound business.  Amy and Steven are active in the Sutton Rodeo business and Amy works for Beck Ag.  Glenn and Joan enjoy being Grandparents to Cash & Sage Voegele, Kinsley Altena, and Shaden Muller.  Joan is a nurse at the Sanford Women’s Clinic.

Glenn is the church treasurer at Turner County First Presbyterian Church where they are active members.

The South Dakota Soybean Checkoff is funded by all SD Soybean farmers. Checkoff monies are invested in research for new uses, crop improvement, domestic and international market development. The SD Soybean Association is a membership organization that focuses on policies and laws affecting soybean growers. Together the SD Soybean Checkoff and SD Soybean Association work to ensure the economic stability and long-term environmental sustainability for soybean families and the food production system.