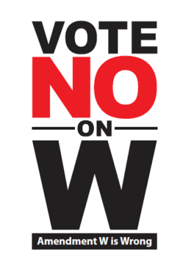 A statewide vote is required to change the South Dakota Constitution. There is no other way to change it – period. It is set up that way to make sure changes to the Constitution get a full debate and that a majority of voters agree.
“Pass it and you’re stuck with it, unless you can pass another statewide vote to change Amendment W again,” said David Owen, Chairman for No on W Committee.  “Voters should be aware of the following facts.”

There are two ways to change South Dakota’s Constitution:

Either way, it takes a statewide vote to make the change.

For this reason, it will take a statewide vote to fix Amendment W when any of its eight pages prove to have unintended consequences.

It will take a statewide vote to change campaign contribution limits that prove to be either too limiting or not limiting enough.

It will take a statewide vote to make sure that groups of constituents can meet with elected officials and have coffee or even lunch without such meetings being classified as “illegal gifts”.

Public Vote on Rules and All Changes in Initiative Law.

Even worse than having to conduct a statewide vote to fix any of Amendment W’s mistakes, the amendment itself clearly says NO LAW that “substantively changes the rules, requirements. or criteria governing the initiative or referendum process may take effect until after that law has been submitted to a vote of the electors of the state and approved by a simple majority of those voting on the question.” [Section 2, Subsection 18; #3; 3rd paragraph]

Amendment W will force every regulation or law changing the initiative process to be voted on in a statewide vote.  For example, during the 2018 legislative session, Senator Nesiba (D-Sioux Falls) wanted to extend the time frame for gathering signatures so groups had more time to get petitions signed. Amendment W says that can’t happen without a statewide vote.

The legislature has made several changes to how petitions must publish the actual law being proposed by an initiative, changes including details such as the font size of the text.  Small changes like this shouldn’t require a statewide vote.

Amendment X is also on the ballot this November and, if passed, will put into the Constitution a requirement that future constitutional amendments can only be approved with 55 percent or more of the votes in a statewide election.

Amendment W on the other hand says amendments (or laws or rules) changing the initiative process can pass with a majority vote in a statewide election. Because Amendment W declares that it has control over all other provisions of the constitution, regardless of when they were approved, future amendments pertaining to the initiative process will not need 55 percent of the vote no matter how many people vote for Amendment X.

Another set of reasons why W is WRONG and people should VOTE NO ON AMENDMENT W.